Bioinformatics at EBI: Fulfilling the Work of Systems Biology 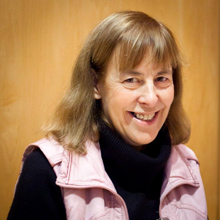 The life sciences are now, more than ever, a big data science. Life sciences are firmly embedded as an “eScience”. One of the major bottlenecks in systems biology is the handling, management and interoperability of data. I will introduce EBI - and describe how we are approaching some of these challenges.

After graduating in Physics from Nottingham University in 1967, Janet studied for her Ph.D. in Biophysics at the National Institute for Medical Research, Mill Hill, London. Her research is focused on understanding the structure , function and evolution of proteins using computational approaches.

In October 2001 Janet became Director of EMBL – EBI. In 1999 Janet was elected a Fellow of the Royal Society and a Member of EMBO in 2000; in 2002 she was appointed Extraordinary Fellow, Churchill College, Cambridge and Honorary Professor, University of Cambridge and in 2003 she was elected a Foreign Associate Member of the U.S. National Academy of Sciences. In 2012 she was appointed a Dame Commander of the British Empire.