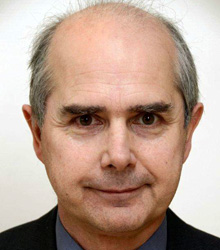 Following an outline of key aspects of plant anatomy and physiology, there will be a brief description of modelling approaches used to represent aspects of the plant physiome.

Recent technological developments will be introduced including non-destructive fluorescent sensors of hormone levels, advanced image analysis techniques and novel multiscale modelling frameworks. Their application will then be described in three examples, specifically the hormone-dilution hypothesis of primary root growth, a biological tip-switch in root responses to gravity signals, and the role of multicellular mechanics in the emergence of lateral roots.

Charlie Hodgman has spent over 30 years at the interface between biology, mathematics and computer science to address biological issues in both industrial and academic settings.

In 2004, he moved from GlaxoSmithKline to the University of Nottingham to take up the Chair in Bioinformatics and Systems Biology and in 2007 became the founding director of the Centre for Plant Integrative Biology.

Since then, the majority of his research effort has focussed on root biology (in Arabidopsis and rice) and fruit ripening (in tomatoes).