A systems biological view of Evolutionary Biology: all in the interactions 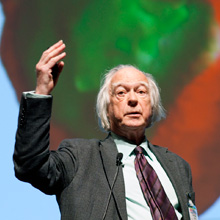 It is becoming clear that variation in organisms can be created by many different processes, including the gradual mutation idea of the Modern Synthesis, but also including larger changes through natural genome engineering, various forms of inheritance of acquired characteristics, symbiogenesis, genetic assimilation. Indeed, evolution itself must have evolved. The question how these mechanisms relate to each other is a fascinating new area for systems biology.

Denis Noble is Emeritus Professor of Cardiovascular Physiology. He now directs the computational physiology research group. He was the first to model cardiac cells (in two papers in Nature in 1960) and has published over 350 research papers.